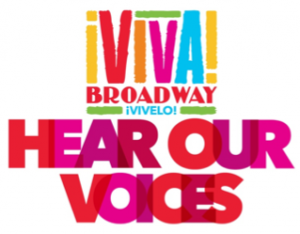 Playbill and The Broadway League present ¡Viva Broadway! Hear Our Voices, a digital concert in celebration of Latinx Heritage Month, as well as Latinx milestones in theatre, featuring an extraordinary roster of award-winning stage and screen Latinx talent. Hosted by Andréa Burns (In the Heights, On Your Feet!), the concert will premiere on Playbill.com, Playbill’s YouTube Channel and on The Broadway League’s website (Viva.Broadway) on Thursday October 1, 2020 at 8PM ET and remain available for viewing until Monday October 5 at 8PM ET. ¡Viva Broadway! Hear Our Voices will salute the vibrant, lasting legacy that Latinx artists have contributed and continue to give to Broadway and the entire theatre community while showcasing Latinx talent in an effort to continue to increase representation throughout the industry. Directed and choreographed by Olivier and Tony Award-winning director/choreographer Sergio Trujillo (Jersey Boys, Ain’t Too Proud), this theatrical event will feature appearances by a roster of award winners and nominees, including Lucie Arnaz, Gloria Estefan, John Leguizamo, Lin-Manuel Miranda, Luis Miranda, Chita Rivera and Thalía. The event will include a performance from members of the original cast of In the Heights, including Karen Olivo, Andréa Burns, Janet Dacal, Olga Merediz, Carlos Gomez and Luis Salgado; as well as performances from Broadway-bound musicals and new works including John Leguizamo’s Kiss My Aztec; Arrabal; Passing Through; and a look at the first Spanish-language production of A Chorus Line. Viva Broadway is The Broadway League’s national audience development partnership with the Latinx community that helps bridge the world of Broadway with Latinx audiences across the country. Proceeds from the concert will support Broadway Cares/Equity Fights AIDS and Broadway Bridges. For more information visit BroadwayLeague.com or follow @BroadwayLeague on Twitter and Facebook.com/BroadwayLeague. Follow @Broadway on Instagram for more Broadway content.