A French cultural vacation awaits you in Québec City every day of the year, but even more so on the first weekend in August when 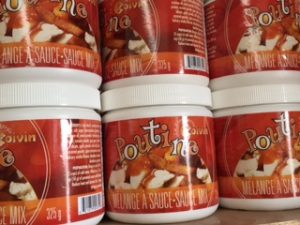 The New France Festival (Les Fêtes de la Nouvelle-France) is held, now in its 20th year. Multicultural Travel News was in Québec City this past August for the Festival, an annual outdoor 5-day celebration, perhaps best described  as « Colonial Williamsburg meets The Renaissance Faire,” with a serving of “poutine” –  the French way of eating French fries (gravy and cheese curds instead of ketchup.) Costumez-vous! – Wear a period costume to get in the true spirit of the event or comfortable clothes (costumes are available to rent from Costumier de l’époque – view some selections at http://www.costumierlepoque.com/) and immerse yourself in an educational, musical, fun-filled and delicious experience which evokes the time when, contrary to the popular sentiment of today, we were all furriers back then. Our visit started with a bit of history and ended with hysterical laughter as we first traveled back in time listening to the re-enactor explain his role as the “engagé” (contract worker) and culminating in a corn eating competition with our friend Paul eating 25 ears of corn, which, amazingly, brought him only up to 3rd place. The “engagé,” this hired hand, addressed our group: “Who here is from the 13 colonies?” And so began our foray into the past at this unique encounter with history which took place at the Fortifications of Québec National Historic Site- Artillery Park, part of this designated UNESCO World Heritage Site.   Favorite food: the biggest and best turkey leg I have ever tasted, a featured delicacy at the BBQ of Yesteryear tent, also serving grilled specialties inspired from the Huron-Wendat, Celtic era and Acadia peoples. Favorite “awwww” moment: a bunny in a basket being passed around amongst 3-year olds at the petting zoo pen. Also, not to be missed at the biggest history fest in North America – old-timey vendor booths, tasting kiosks, major music shows, staged mini performances, stilt-walking acrobats, a fencing workshop, a strongman demonstration, and First Nation’s music and dance.

Scenes from the New France Festival 2016 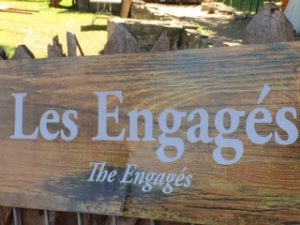 Over 200,000 visitors partake each year in The New France Festival billed as “showcasing, with humor, the 17th and 18th century period when Québec was a French colony. “

This year’s theme, “Imagine the Americas” was an invitation “to discover the cultural diversity of the New France era and to celebrate the influence of New French explorers, pioneers and adventurers across the Americas.”

Not only the French and the Natives but all inhabitants of the era are recognized and celebrated – Italians, Germans, Basque, Africans, West Indians,  Spaniards, English, Irish and Scots as visitors immerse themselves in life as it was in the 17th and 18th centuries. 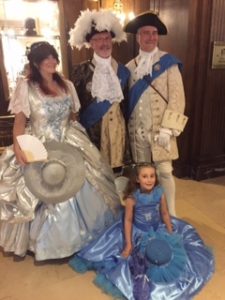 Here, the schedule of over 400 shows and re-enactments, invites festival-goers to  come watch traditional dances and meet Huron-Wendat artisans at the great teepee.

“As we prepare to celebrate the 150th anniversary of Canada’s Confederation in 2017, it seems more important than ever to support events that help Canadians discover their rich heritage in an entertaining and original way. Thanks to the talent of the artists, artisans and historical performers showcased during the New France Festival, citizens can dive into the heart of what life was like in the time of their ancestors”, said The Honorable Mélanie Joly, Minister of Canadian Heritage, in a statement.

Canadian history books and museums do not present a white-washed version of the founding of the region: The integral role of the First Nations, or First Peoples of Canada, is recognized and credited, not only at this festival but in museum displays and official websites where reference to the French “discovery” of the region is always presented in quotes.

Beyond the festival, continue your French cultural immersion in food and museum visits to understand the history of the 30 million French speakers across the Continent.

Without a doubt, the ideal hotel as your base of operations for your own explorations is the 125-year old castle, The Fairmont Le Château Frontenac Hotel (http://www.fairmont.com/frontenac-quebec/) located inside the walls of Old Québec, overlooking the St. Lawrence River and adjacent to the Funiculaire du Vieux Québec, the funicular rail car that transports visitors down to the Petit Champlain area and back up.

Time your stay at the hotel to include a Saturday evening, as we did,  when the International Fireworks show can be viewed from the Dufferin Terrace boardwalk.

A good place to start your visit to Québec City is online at http://www.quebecregion.com/en/quebec-city-and-area/old-quebec/

Upon arrival, visit the Tourist Office, just across the Place d’ Armes square from the hotel, which is also the starting point for the Red Bus Line of the HopOn HopOff city tour on board Autobus Les Tours du Vieux-Québec Inc.

A good starting point, before even boarding the bus, is a visit to the Musée de l’Amérique Francophone, to explore and understand the history of the French presence in America. (https://www.mcq.org/en/informations/maf). An introductory video sets the stage for the visit, which recently included an exhibition  entitled « The Rediscovered Colony” a fascinating look at artifacts found on the Cartier-Roberval archeological site. 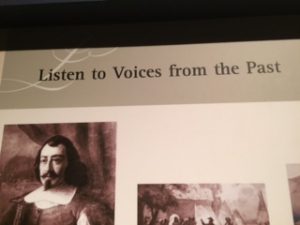 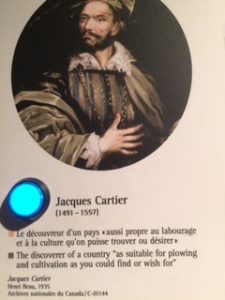 A permanent exhibition, “People of Québec…Then and Now” at the Museum of Civilization (https://www.mcq.org/en/exposition?id=26622&intcid=ban|accueil|boites|People_of_QubecThen_and_Now) focuses on the history of the city and “This is Our Story:  First Nations and Inuit* in the 21st Century”  features the history and culture of the eleven Aboriginal nations of Québec, a population of about 90,000. (https://www.mcq.org/en/exposition?id=26532&intcid=ban|accueil|carousel|This_is_Our_Story|enexpositionid26532) This museum is stop number 3 on the Red Line.

I also enjoyed the St. Louis Forts-and-Châteaux National Historic Site museum/archaelogic dig  « under the boardwalk » where you’ll find (not love, per the Drifters’ song of the 60’s) but a guided tour of the ruins of what was once the official residence and seat of power of the French and British governors for more than 200 years. (http://www.pc.gc.ca/eng/lhn-nhs/qc/saintlouisforts/index.aspx) This boardwalk is the Terrasse Dufferin, about 5 city blocks long, perfect for a stroll atop the  cliff almost 200 feet above the St Lawrence River.

Musée Huron-Wendat,  a museum accessible by a free shuttle bus from the traffic circle outside of the tourist office and directly in front of the Chateau Frontenac, is dedicated to promoting the heritage of the Wendat people with a  mandate to teach and popularize the history, culture and art of the Wendat people and of other First Nations. (http://tourismewendake.ca/en/activities/huron-wendat-museum/)

An exceptional collection of Inuit art is on display at the Musée national des beaux-arts du Québec, (https://www.mnbaq.org/en) which this past summer inaugurated the Pierre Lassonde Pavillon on Grande Allée St. Installations, contemporary Québec art, and the monumental fresco by Jean-Paul Riopelle “Tribute to Rosa Luxemburg – thirty paintings forming a triptych almost 130 feet long,  are highlights. A perfect visit would culminate, as ours did, at the Museums’ MC Lepage gastronomic restaurant of Star Chef Marie Chantal Lepage for an unforgettable meal. This museum is stop number 10 on the Red Line.

A short walk from the museum is Avenue Cartier, with unique shops and its own artistry, in the Montcalm district. From there, instead of the bus, continue by foot along Grande Allée Street to enjoy an outdoor drink at one of the many sidewalk cafes. The Hôtel Château Laurier Québec, at the intersection of Grande Allée Street and Place George-V Ouest is another great option as a base for your Québec City visit. (https://www.hotelchateaulaurier.com/en/)

A walkable city, if you don’t mind hills that rival San Francisco, Québec  has many other neighborhoods worth exploring. I do mind hills actually so I used the HopOn HopOff map to figure out what stops would save the most climbing. That’s how I came to HopOff at the lively shopping district of Nuovo Saint Roche. This neighborhood is stop number 2 on the Red Line. Wouldn’t you know that these NYC East Village-style shops wouldn’t open until noon so I only got to window shop at a cute store named “Si Les Objets Pouvalent Parler.”

Back on the bus for transport to Rue du Petit Champlain, an historic area that I visited several times during my days in the city. Quartier Petit-Champlain, North America’s oldest commercial district, is chock full of restaurants and boutiques housed in 17th– and 18th-century buildings. Here there are also several more museums worth a visit for those seeking more history.

The funicular up to the Chateau was definitely preferable to the hilly staircase climb, which is what I took one day, following my lunch at Cochon Dinque, a cute restaurant ideal for people watching. Another time it was Hop back on the bus for the rest of the circular visit ending back at the Chateau.

Our  HopOn HopOff package included  the red, green, and blue lines for two consecutive days which gave me time for some further afield visits. I took the 2 pm departure for a short ride out of the city to the Montmorency waterfall. 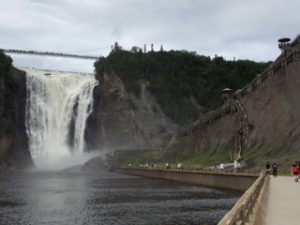 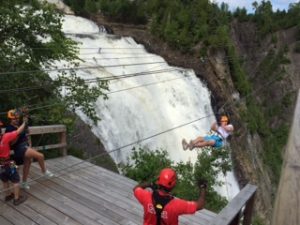 Twenty minutes later we were dropped off at the base of the Falls, where you can witness the impressive natural phenomenon that is higher than Niagara Falls. Before our tour bus’s 4 pm return, I had time to ride the cable car up to the top of the Falls, walk across the suspension bridge to gaze down at the majesty and then cable car back down. A zipline view is also available, no thank you.

Another mini excursion can be had aboard the Québec City-Lévis Ferry — a commuter ferry for cars, bikes and walk-ons — for a quick visit to Levis Island. From the ferry port you can climb the stairs for a walk around this island’s historic district or simply ride the next departure back to Québec City for the spectacular view from the boat, reminiscent of tourists riding New York City’s Staten Island Ferry for a view of the Statue of Liberty. (https://www.traversiers.com/en/home/)

I also enjoyed a tour of the small museum of artifacts donated by the Sisters who lived in in Le Monastère des Augustines a restored 17th century monastery, now a hotel, still dedicated to healing. (http://monastere.ca/en)

I’ve described a busy non-stop see everything visit to Québec, yet I could be tempted back to to Le Monastère des Augustines to partake of their special sleep package. Of most appeal is the package called Sleep regeneration and wellness designed to promote sleep and cellular regeneration.

Sleep better to live better is the theme of this package and includes a 3, 5, or 7-night stay designed with this philosophy: “Insomnia, short nights and frequent waking drain our energies and limit our cells’ metabolic activity. As a result, our overall health is affected by lack of sleep.”

Highlights of the package include:

If a vacation to Québec City could be assigned keywords, tag this one Food, Culture, Art, History, Fun. 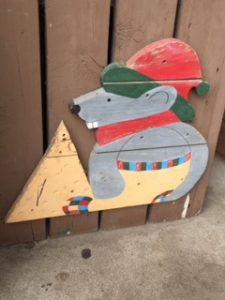 All photos by Lisa Skriloff