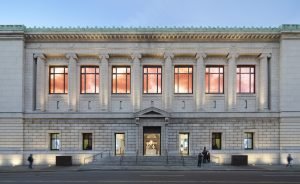 Louise Mirrer, president and CEO of the New-York Historical Society, announced that the institution will expand its building on Central Park West, adding more than 70,000 square feet of program space for itself and for The American LGBTQ+ Museum, New York’s first museum dedicated to LGBTQ+ history and culture, which will make its permanent home at New-York Historical. The design by Robert A.M. Stern Architects, which was unanimously approved and highly praised by the Landmarks Preservation Commission for its respect for the past and solicitation of community input, will provide New-York Historical with additional classrooms, galleries, collections study areas, and a state-of-the-art compact storage facility for the institution’s renowned Patricia D. Klingenstein Library. While the new building is under construction, The American LGBTQ+ Museum will partner with New-York Historical to develop programming in the Museum’s existing building and outdoor spaces, bringing the voices, perspectives, actions, and achievements of this community to the foreground for hundreds of thousands of annual visitors and New York City schoolchildren. Upon completion, The American LGBTQ+ Museum will occupy the entirety of the expansion’s fourth floor and encompass two galleries, access to the roof garden, and areas for offices and storage. The addition of onsite classrooms will enable a dramatic expansion of New-York Historical’s service to tens of thousands of New York City public school students. These classrooms will serve the Academy for American Democracy program, an educational initiative for New York’s sixth-grade students that is transforming the way history and civics are taught in middle school. New galleries and collections study areas will host the graduate students from New-York Historical’s Master of Arts in Museum Studies program, launched in 2019 through a partnership with CUNY’s School of Professional Studies. The program aims to diversify New York City’s cultural workforce, providing students with the knowledge, skills, and preparation to excel as professionals in the museum community. The collections of the Patricia D. Klingenstein Library include many unique items available at no other library in the world, among them rare copies of our nation’s foundational documents. The Library’s two original storage stacks, dating from 1904 and 1937, are outmoded, and the majority of the collection has been moved offsite as a precaution. Construction of new, state-of-the-art compact storage will allow for the rehousing of a substantial part of the collection at New-York Historical’s Central Park West home, making materials readily accessible to Library users. New-York Historical expects to undertake the expansion as a phased project. The first phase will begin in summer 2022 and will focus on the below-grade library stacks. A second phase will construct galleries, classrooms, and other spaces once target funding is achieved. To learn more, visit thelgbtqplusmuseum.org.