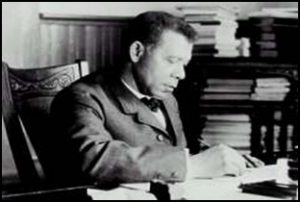 The first African American family has been living in the White House for a couple of years now. So it may be a bit hard to believe that there’s been a 107-year gap between the time the Obamas took up residence in the White House and the year – 1901– when the first African American was formally invited (by then-president Theodore Roosevelt) to simply visit the place. That guest was Booker T. Washington – born a slave, fathered by a white man he never knew, a child who hungered for knowledge more than he hungered for anything else in life. His drive to become educated, and to foster education for other African Americans, led to his founding the Tuskegee Institute in 1881 in Alabama, which he built into an internationally-respected center of learning. The author of Up from Slavery went on to advise three US presidents, win an honorary degree from Harvard and become recognized as the country’s foremost black educator.

Washington’s inspirational story is on full display at the Booker T. Washington National Monument in the historic Blue Ridge region, a 45-minute drive from Roanoke. The memorial is situated within a lush national park, and there you can see a recreation of the life young Booker lived with his mother and siblings. The family slept on rags on the wooden floor of a one-room house, and Booker said they were used to always being hungry. (Ironically, their mother served as the plantation’s cook.)

Take a self-guided tour through the Plantation Trail, which winds through many acres of the original property owned by tobacco farmer James Burroughs. There you can get an idea of what the life on the plantation – with its tobacco barn, smokehouse, corn crib, barns for pigs, sheep, rosters and other animals on full display – was like for Booker, who lived there till age 9, when emancipation was declared and he and his family moved on to West Virginia.

The memorial includes a brief but moving film, where we learn that Booker’s childhood was nothing but work and in fact “there was no period of my life devoted to play.” And yet above all he dreamed of the day he could go to school: “I had the feeling that to get into a schoolhouse and study would be about the same as getting into paradise.” (No doubt you’ve heard your children utter similar sentiments.)

In a lovely setting in rural Virginia, the Booker T. Washington National Monument provides a window into the life of a boy who grew up to become one of the world’s most inspiring men.