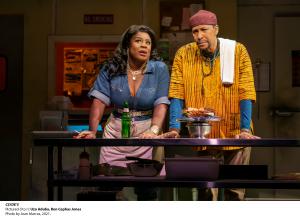 A fast paced 95-minute production with pyrotechnics, both onstage and in its powerful message, Clyde’s is the new play from two-time Pulitzer Prize winner Lynn Nottage, a riveting comedy at Second Stage’s Helen Hayes Theater in New York City. Clyde’s, which takes place in a truck stop sandwich shop, presents Uzo Aduba, (Orange Is the New Black) in the title role, who gives a funny and captivating performance as the boss of four kitchen workers, (Ron Cephas Jones, Edmund Donovan, Reza Salazar and Kara Young) all formerly incarcerated, now trying to rebuild their lives. As the only Broadway company exclusively devoted to living American writers Second Stage is dedicated to introducing the world to bold and diverse voices of American creativity. Among the community initiatives presented along with this production Second Stage is hosting weekly talkbacks and post-show panel discussions to highlight the issues of the play. The talkbacks are curated by a partner group with speakers from their staff and community members, criminal justice reform advocates, and people with lived experience of incarceration and the criminal justice system. The Art for Justice Fund organization will lead the December 9th talkback and also contributed a Playbill insert “10 Things You Can Do to Support Returning Citizens.” Additional Second Stage social justice initiatives aimed at people affected by the U.S. criminal justice system include a paid apprenticeship at Second Stage for impacted youth; an art exhibit at the Hayes Theater featuring works by people impacted by the justice system; and a job fair aimed at connecting justice system-impacted individuals with job opportunities and training. The Job Fair, tentatively scheduled for early 2022, is presented in partnership with the Youth Justice Network and other groups focused on employment services for returning citizens to engage hotels, restaurants, and other businesses in Times Square that have a commitment to Fair Chance hiring. Second Stage is inviting fellow Broadway non-profit theaters to participate in the event. Learn more about all community initiatives at https://2st.com/shows/clydes#community. Second Stage has embarked on a path to become a diverse, equitable, inclusive and anti-racist organization. Learn more at https://2st.com/visit/our-dei-commitment Purchase tickets for CLYDE’S at 2ST.com or call 212-541-4516.