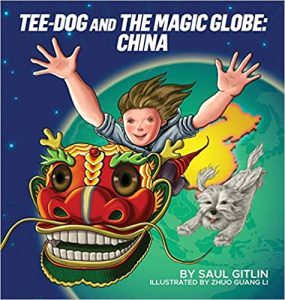 One young boy, Joey, and his magical pet dog, Tee.

One exciting and educational nighttime adventure to learn about China!

The story, written in rhythm and rhyme for children ages 5-10 and told through the perspective of a young boy named Joey who is transported to China by his magical pet dog named Tee, educates English-speaking children about China’s geography, size of population, capital city of Beijing, and famous sites including Tiananmen Square, the Forbidden City, and the Great Wall. The story also introduces spoken and written Chinese language and China’s heritage of invention. With its accompanying rich illustrations, the book is a fun and memorable introduction for early readers to China, one of the most ancient, influential, and largest countries in the world.

Tee-Dog and The Magic Globe: China is authored by Saul Gitlin (www.saulgitlin.com), and illustrated by Zhuo Guang Li.

Said Marina Aris, Founder and Publisher of The Brooklyn Writers Press, “When I first reviewed the manuscript for Tee-Dog and The Magic Globe: China, I immediately realized this was a book that needed to be published now for several key reasons. With China’s phenomenal growth and rapidly expanding global impact and influence, China continually makes daily global headlines. The next generation of Americans and other Westerners (e.g. our children) can benefit from being knowledgeable about China, its culture, and its language as they emerge into young adulthood. Second, the existing landscape of early reader, English-language literature about China has been historically narrow, focused mostly on the retelling of famous stories, describing holiday celebrations, or presenting factual information about the country in a straightforward way. Against this backdrop, Tee-Dog and The Magic Globe: China really ‘cracks the code’ in offering an entertaining and memorable story for children by delivering a wide range of practical knowledge about China’s history, culture, and language.”

Said Tee-Dog and The Magic Globe: China author, Saul Gitlin, “I first wrote this book for personal reasons to share information with my own two small children about the country to which I have devoted my entire academic and professional life. Today, though, interest in learning about China is growing exponentially, with more than 400,000 K-12 students in the United States alone pursuing studies of China and the Chinese language, as well as countless young students in other Western countries. I hope my book will support these students, and further inspire even more children to think and learn about China.

Additionally, since immigrants of Chinese origin in North America comprise the single largest Asian immigrant population (numbering approximately 4 million in the United States and 2 million in Canada), I also expect that my book can serve the needs of Chinese immigrant parents seeking to impart their culture to their children growing up here. At the same time, the story can help foster greater cross-cultural appreciation and understanding between children of all ethnic backgrounds.”

Tee-Dog and The Magic Globe: China is now available for purchase in both hardcover and e-book formats wherever books are sold.

The book has been selected by Multicultural Marketing Resources, Inc. for inclusion on its website page, Recommended Multicultural and Diversity Books at https://multicultural.com/books/ where the book can be purchased via an Amazon link.

Early Praise for Tee-Dog and The Magic Globe: China

“What a fun and mesmerizing introduction Saul Gitlin has penned for young children to learn about China! While Western adults need to learn more about China’s culture and history as the Middle Kingdom gains more influence on the global community,  Tee-Dog and The Magic Globe: China is the perfect book to launch children on their own journeys to understanding the country that will impact the entire world in a myriad of ways from culture to trade in the coming century. I highly recommend this book!”

“Tee-Dog and The Magic Globe: China is a magical and entertaining first introduction to China for English-speaking children, with a practical side. Young readers are introduced to a broad range of information about the country’s culture & geography and offered a first lesson in Mandarin. We learn that it’s not that difficult to learn to speak Chinese, and with China’s heritage of invention bringing us things like paper and umbrellas, maybe the country has never really been that far away.”

“Tee-Dog and The Magic Globe: China takes children on a whirlwind visit to China to introduce the richness of its language and culture in one magical evening. Narrated in rhyme, and with child-friendly language and brilliant illustrations, this book will capture the imagination of young readers as well as the grown-ups who read with them.”

“Tee-Dog and The Magic Globe: China is an exciting and educational adventure that will entertain all young readers, while allowing children in families of Chinese origin to connect with their own heritage. With its memorable rhythm and rhyme, the story is an excellent, age-appropriate introduction to international culture.”

“In an increasingly global world, cultural competency is an important skill for children to develop early. In Tee-Dog and The Magic Globe: China, the main characters, Tee and Joey, take young readers on an engaging tour to gain a glimpse of China, appreciating aspects of the country’s history and language, to its geography and inventions. The story is an exciting exploration, sure to spark curiosity and inspire readers to learn even more about China.”

About the Brooklyn Writers Press

The Brooklyn Writers Press (www.brooklynwriterspress.com) is an award-winning hybrid publisher for emerging writers. We bridge the gap between traditional and self-publishing by partnering with writers to help them write, produce, market, and distribute books that meet professional industry standards. We serve as an ally, partner and guide in an ever-changing publishing landscape. Unlike vanity publishers or self-publishing distribution platforms, we curate our titles and adhere to the Independent Book Publishers Association (IBPA) Industry Standards Checklist (https://www.ibpa-online.org/page/standardschecklist) Our mission is to create a win-win-win for writers, readers and the publishing industry.

About Saul Gitlin — Author, Tee-Dog and The Magic Globe: China

Saul Gitlin, who holds two degrees in Chinese Studies from Cornell and Yale, and an MBA from Columbia, was among the earliest American students to study in China shortly after the US and China normalized diplomatic relations in 1979. He subsequently lived and worked in China for almost a decade from the mid-1980s through the 1990s and has since continued to specialize in China-related business development throughout his long professional career. Fluent in both spoken and written Chinese, Gitlin is also a widely recognized, quoted, and published expert in international, multicultural, and multilingual communications focused on Asian populations, and previously spent 20 years of his career leading agencies in senior strategy and management roles within publicly traded global communications holding companies, including The WPP Group/Young & Rubicam, and the Interpublic Group of Companies (IPG).

Zhuo Guang Li is an award-winning New York-based artist, illustrator, and photographer. Born and raised in China prior to immigrating to the US, he leverages his deep bi-cultural perspectives to bring to life the characters and story in Tee-Dog and The Magic Globe: China.